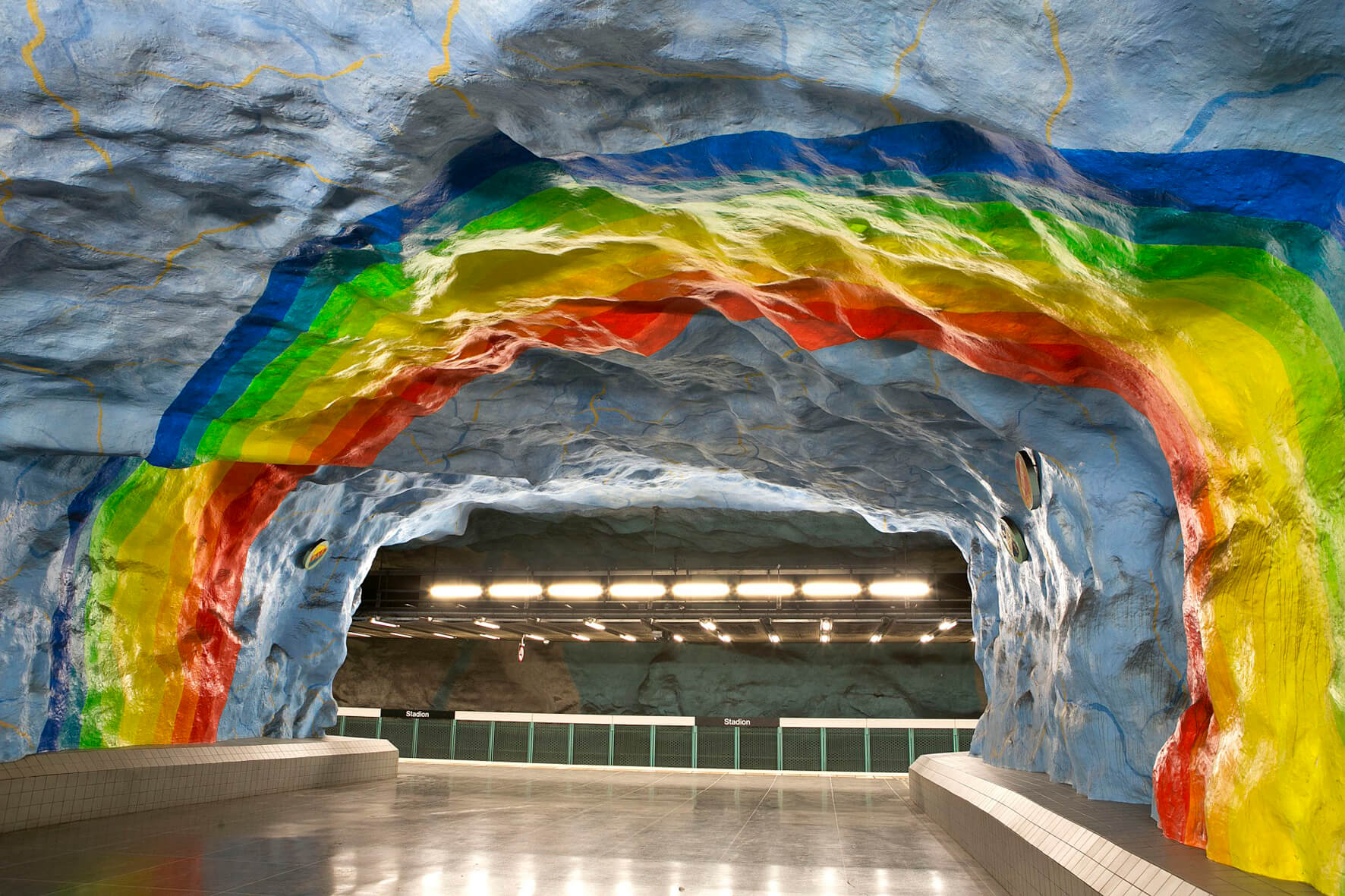 94 stations with art
Today the Stockholm Metro has 100 stations and more than 90 of them feature art created by over 150 artists with the support of even more civil servants, politicians, engineers and architects. Although they all form part of the same Metro, the stations and the art they contain are all very different. In 1957 T-Centralen was the first station to gain art, which means that we today can find art from six decades in the Stockholm Metro.

Unique architecture
It’s not only the art but also the architecture, which makes Stockholm Metro appreciated and famous way beyond Sweden’s borders. Ever since the early 1970-ies most of the stations have been built as what we call cave stations. The rock face is covered with a layer of sprayed concrete, which follows the shape of the rock, giving an illusion of a station in a cave. The artists were working in long-term partnerships with architects and engineers to create complete environments rather than individual artworks. The cave stations are found on the blue Metro line and partly on the red Metro line.

An underground garden
One of the most spectacular stations is Kungsträdgården, located right in the city centre. The artist Ulrik Samuelson has transformed the station into an underground garden, depicting the history of Kungsträdgården (The King’s garden). Here you will find cast sculptures once on display at Makalös Palace, formerly on the same site, an elm tree trunk clad in stone and a waterfall in the rock. At one of the exits there is a kind of archaeological dig – a Forum Romanum for Stockholm – with ancient columns and fragments from torn down buildings in Stockholm.

Temporary Art exhibitions – Art in transition
An important part of SL’s (Stockholm Public Transport) work is to focus on art that is being created today. SL also wants to give more artists the opportunity to show their work in the public space of the Metro. Therefore you’ll find temporary art exhibitions in seven centrally located stations, where the art is replaced 1-4 times a year.

At Odenplan station you can for example see art works of students from different art and design colleges in Sweden. At Slussen and Fridhemsplan stations there are black and white pictures between advertising billboards behind the track. If you travel to Zinkensdamm or Gärdet you will find colour prints on the wall behind the track and at Mariatorget station there is an exhibition with photography. Finally, at Skanstull station four monitors show art videos.

Art at the Commuter Rail stations
In 2017 two new underground commuter rail stations opened: Stockholm City and Stockholm Odenplan. In total 14 artists have worked with the art at the very large stations, which can be experienced as Art Galleries of contemporary art.